What is Flask Python

Flask is a web framework, it’s a Python module that lets you develop web applications easily. It’s has a small and easy-to-extend core: it’s a microframework that doesn’t include an ORM (Object Relational Manager) or such features.

It does have many cool features like url routing, template engine. It is a WSGI web app framework.

What is a Web Framework?

A Web Application Framework or a simply a Web Framework represents a collection of libraries and modules that enable web application developers to write applications without worrying about low-level details such as protocol, thread management, and so on.

Flask is a web application framework written in Python. It was developed by Armin Ronacher, who led a team of international Python enthusiasts called Poocco. Flask is based on the Werkzeg WSGI toolkit and the Jinja2 template engine.Both are Pocco projects.

Werkzeug is a WSGI toolkit that implements requests, response objects, and utility functions. This enables a web frame to be built on it. The Flask framework uses Werkzeg as one of its bases.

jinja2 is a popular template engine for Python.A web template system combines a template with a specific data source to render a dynamic web page.

This allows you to pass Python variables into HTML templates like this:

Flask is often referred to as a microframework. It is designed to keep the core of the application simple and scalable.

Instead of an abstraction layer for database support, Flask supports extensions to add such capabilities to the application.

Why is Flask a good web framework choice?

Unlike the Django framework, Flask is very Pythonic. It’s easy to get started with Flask, because it doesn’t have a huge learning curve.

On top of that it’s very explicit, which increases readability. To create the “Hello World” app, you only need a few lines of code.

This is a boilerplate code example.

If you want to develop on your local computer, you can do so easily. Save this program as server.py and run it with python server.py.

It then starts a web server which is available only on your computer. In a web browser open localhost on port 5000 (the url) and you’ll see “Hello World” show up.
To host and develop online, you can use PythonAnywhere 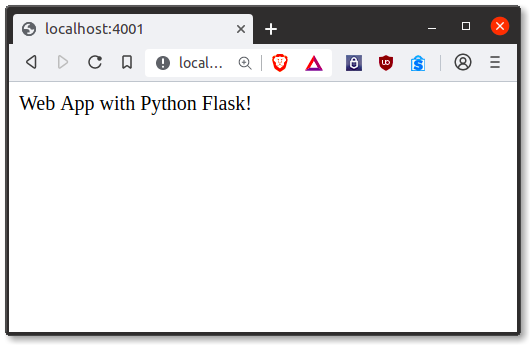 It’s a microframework, but that doesn’t mean your whole app should be inside one single Python file. You can and should use many files for larger programs, to handle complexity.

Micro means that the Flask framework is simple but extensible. You may all the decisions: which database to use, do you want an ORM etc, Flask doesn’t decide for you.

Flask is one of the most popular web frameworks, meaning it’s up-to-date and modern. You can easily extend it’s functionality. You can scale it up for complex applications.

How to prepare data for learning with sklearn