Meet K-Nearest Neighbors, one of the simplest Machine Learning Algorithms.

This algorithm is used for Classification and Regression. In both uses, the input consists of the k closest training examples in the feature space. On the other hand, the output depends on the case.

K-Nearest Neighbors is easy to implement and capable of complex classification tasks.

It is called a lazy learning algorithm because it doesn’t have a specialized training phase.

It doesn’t assume anything about the underlying data because is a non-parametric learning algorithm. Since most of data doesn’t follow a theoretical assumption that’s a useful feature.

K-Nearest Neighbors biggest advantage is that the algorithm can make predictions without training, this way new data can be added.

It’s biggest disadvantage the difficult for the algorithm to calculate distance with high dimensional data.

K-Nearest Neighbors has lots of applications.

A few examples can be:

K-Nearest Neighbors (knn) has a theory you should know about.

To understand the algorithm in action is better an example. Let’s suppose the dataset we are going to use has two variables.

The task is classifying new data point with “X” into “Red” class or “Blue” class. 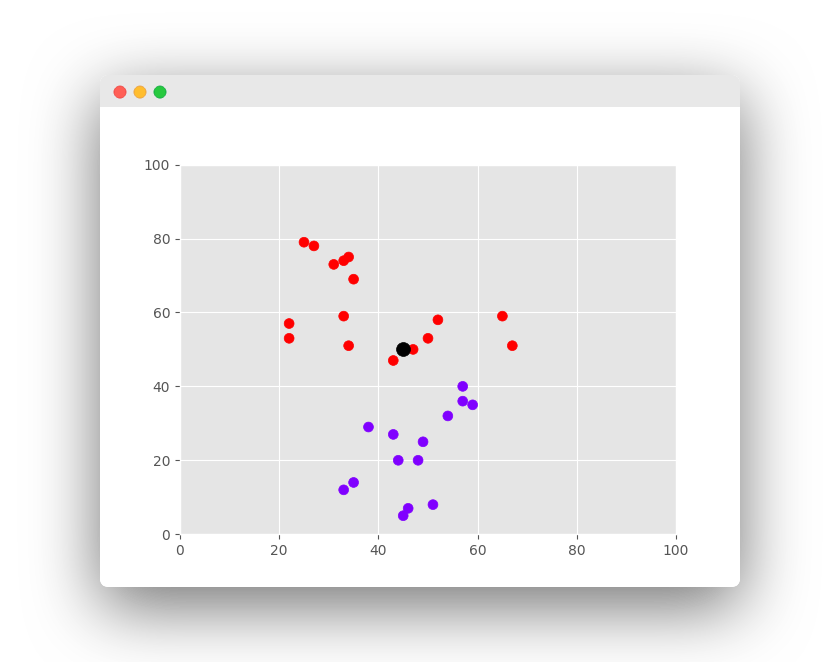 The coordinate values of the data point are x=45 and y=50.

Now we suppose the value of K is 2 (two clusters).

The K-Nearest Neighbors Algorithm starts calculating the distance of point X from all the points.

It finds the nearest points with least distance to point X (the black dot).

The final step is to assign new point to the class to which majority of the three nearest points belong.

To implement K-Nearest Neighbors we need a programming language and a library.

We suggest use Python and Scikit-Learn.

The steps are simple, the programmer has to

Now, we can work with K-Nearest Neighbors Algorithm.

knn can be used as a classifier. Use scikit-learns *KNeighborsClassifier** where the parameter n_neighbors is K.

Then predictions can be made for new values.

knn can be used for regression problems. In the example below the monthly rental price is predicted based on the square meters (m2).

It uses the KNeighborsRegressor implementation from sklearn. Because the dataset is small, K is set to the 2 nearest neighbors.